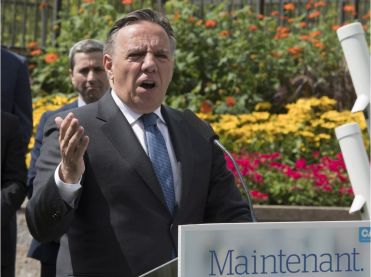 Yesterday, Quebec elected François Legault of the Coalition Avenir Quebec as its next premier. The party has not been shy about its controversial stance on immigration. In May 2018, the CAQ promised that if elected, it will ensure that immigrants are subjected to French language and ‘values’ tests. With its decisive majority win on October 1st, the question remains whether CAQ can be expected to follow through on its contentious promise.

During its campaign, the CAQ had reportedly stated it would reduce the number of immigrants entering Quebec from 50,000 to 40,000. Those immigrants that enter would be required to pass the language and values test after three years in Quebec. Those that fail the test would have their immigration certificates revoked, and be reported to the federal government. By the final debate, Legault softened his tone somewhat, but refused to clarify whether he intended to pursue the newcomers test.

It remains unclear how CAQ intends to carry out its immigration platform. Most of immigration and refugee law – and law concerning deportation – is regulated federally, not provincially. Given the (rightful) controversy of such a test, it is unlikely that the federal government would play any part in the CAQ’s plan.

Moreover, it remains to be seen how the CAQ’s plan practically addresses Quebec’s declining employment rate. The province actively seeks immigrants through its Skilled Worker, Entrepreneur, Investor and Self-Employed Worker Programs, which is not unique to Quebec. Quebec City Mayor Régis Labeaume stated in May 2018 that “We’ll take everybody”, explaining that the city’s future is being threatened by lack of immigration that has led to 17,000 unfulfilled jobs. Labeaume extrapolated that within the next decade, 1.3 million jobs are expected to open up in Quebec.

So, how would the CAQ’s less-than-welcoming approach affect its ability to attract skilled workers, professionals, entrepreneurs and investors looking for a Canadian home – particularly given that other provinces have similar programs? Ultimately, the political tactic appears counterproductive in light of Quebec’s need for workers and investment into the country.